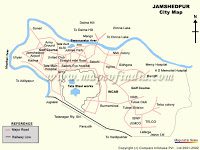 Introduction: – Jamshedpur is also known by the name of Tata. It is located in East Singhbhum district in the state of Jharkhand. Tata has been founded by the most eminent industrialist in his time Jamshedji Nusserwanji Tata. it is fully maintained and developed the town. Tata is bounded by two rivers named are Kharkai and Subarnarekha and also through the Dalamas Hills. Tata town is in remembrance of the founder of Tata Steel company.