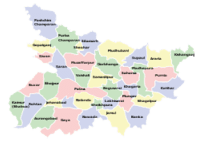 An Introduction of Bihar:-  Bihar is the third largest state by population state of India. This is situated in the north-eastern part of India. Patna is the capital of this state.  Bihar is also reputed as lands of Budha, Mahavir, Chanakya. There are so many historical incidents related to Bihar. In ancient time, Patliputra ( these days known as Patna ) and Rajgir was the capital of Magadha. One of the oldest and world level universities was situated here and its name was Nalanda university.